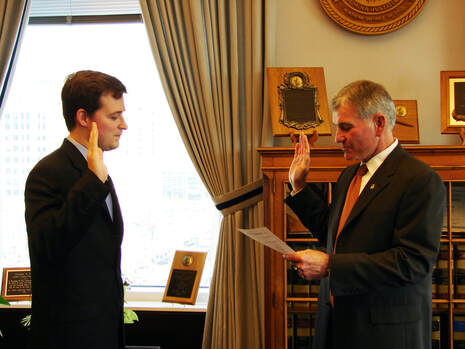 Chris being sworn in as a Special Assistant United States Attorney by Greg White, US Attorney for Northern District of Ohio on 10/3/2006.
Chris Wagner was raised on the west side of Cincinnati.  Chris is a graduate of St. James White Oak Elementary School, St. Xavier High School, and Xavier University.  Chris earned his Juris Doctor from The University of Cincinnati College of Law in May of 2000.

Chris Wagner has tried multiple cases and over 50 jury trials in courtrooms across Ohio.   His extensive experience in the courthouse makes him exceptionally qualified to serve Hamilton County on the Court of Common Pleas.

Chris Wagner’s first job out of law school was as a clerk to Judge Ann Marie Tracey on Hamilton County Court of Common Pleas, the same court to which he now seeks election.   Following his clerkship, he took a job at the Cuyahoga County Prosecutor’s Office in October 2001 and quickly rose to the rank of Major Trial Prosecutor trying murder, rape, and drug conspiracy cases.  During this time Chris Wagner also served as a Special Assistant United States Attorney for the Northern District of Ohio trying gang and organized crime cases for the Northern District.

Since February 2017, Chris Wagner has served as the Chief Legal Officer for Hamilton County Clerk of Courts Aftab Pureval.  Chris has represented the Clerk to Judges and other Elected Officials and worked collaboratively in support of the Clerk’s priorities.
​
Chris and his wife Nora Burke Wagner live in Anderson Township and are the parents of three children: Collin, Claire, and Ryan.  He enjoys live music, cooking, and walking his rescue dog Auggie.